Expertise Summary:
Dr Lucia Zamorano graduated with “maximal distinction” from Catholic University, School of Medicine, Santiago, Chile in January 1980. She was also granted the “1980 Chilean Medical Association Prize” awarded to the best medical student graduating in Chile. She continued her postgraduate studies with a Residency at the Department of Surgery and Division of Neurosurgery from Catholic University, School of Medicine (1980-1983). In 1983, the German Government awarded her a postgraduate fellowship “Deutsche Akademishe Austaushdienst” for postgraduate studies in the field of Neurosurgery. Dr Zamorano did her clinical fellowship at Klinikum Steglitz, Freie Universitat in Berlin and Albert-Ludwig Universitat of Freiburg, Germany. Her main areas of subspecialty during that time were Neurosurgical-Oncology, Epilepsy, Brachytherapy, Radiosurgery, Endoscopy and Minimally Invasive Brain and Spine Surgery. In 1983 Dr Zamorano was awarded her “Doctor in Medicine” Magna Cum Laude by the Freie University in Berlin, Germany.

In 1987 Dr. Zamorano joined Henry Ford Hospital, Detroit, Michigan, USA as a Clinical Neurosurgery Fellow. In 1989 she became Attending Neurosurgeon, a position held until 1991. During that time Dr Zamorano started a program in Image guided Stereotactic Surgery to treat brain tumors and lesions using image guidance. She and her team started the first program in Michigan of Linac Radiosurgery and Brachytherapy with temporary and permanent implants of 1-125 seeds. She also introduced the use of image guidance combined with awake craniotomies and functional mapping in the State of Michigan to optimize the surgical resection of brain lesions located in and surrounding eloquent brain areas. Dr Zamorano’s practice philosophy is to provide the best medical care to each patient through the use of and implementation of cutting-edge technologies, effectively optimizing surgical and radiation treatments thus ultimately improving neurosurgical outcomes.

In 1991, she joined Detroit Medical Center (DMC), Wayne State University(WSU) and Harper University Hospital (HUH), as an Associate Professor of Neurosurgery. She was also appointed as Chief of Neurosurgical-Oncology, Stereotaxis, Radiosurgery, Epilepsy and Skull-Base Surgery. At that time she began her CAS (Computer Assisted Surgery) Laboratory research activities. With the support of multi-instituional collaboration including DMC, WSU and Dr Zamorano’s Lab and leaders of the medical industry (Leibinger, Stryker, Pfizer, Zeiss, etc.) it was possible for Dr. Zamorano to develop the research and initiate projects with a common goal. She sought to bring optimization to surgical procedures through the use of computers and imaging. In 1992 Dr. Zamorano and her team pioneered efforts to develop an interactive image guidance (navigation) system using infrared technology that ultimately has become the standard art for CAS worldwide. This research evolved in a continuous collaboration in research and development Zeiss, Pfizer and then Stryker-Leibinger. Other areas of clinical impact included the program for Epilepsy Surgery she and her colleagues started in 1992. The CAS Research Lab work was instrumental in the development of the clinical programs at WSU and DMC. Further examples of Dr. Zamorano’s innovations include development of instrumentation and technologies include stereotactic frames (ZD stereotactic frame) developed with Leibinger, Germany, rigid and flexible endoscopes (with Storz, Codman), robotic Microscope (Zeiss), radiofrequency electrodes and instrumentation for functional mapping, etc. and computers and software for 3D-2D surgical planning, NSPS (Neurosurgical Planning System).

In 1996 Dr. Zamorano was appointed Professor of Neurosurgery and Radiation Oncology for the Department of Neurosurgery, Radiation Oncology and Karmanos Cancer Institute, Wayne State University. She also held the position of Chief of Neurosurgical-Oncology, Stereotaxis, Radiosurgery and Epilepsy Divisions of the Department of Neurosurgery at Wayne State University. After a lengthy planning process, in 1996, Dr. Zamorano and the team of Radiation oncologists at DMC introduced the first Gammaknife System in the State of Michigan. It remained the only gammaknife in the state until 2004. She was appointed Medical Director of CAS and Gammknife at HUH, DMC. Since then, Dr. Zamorano has treated more than 1000 patients with brain tumors including brain metastasis (from lung, breast, melanoma, GI tumors, ovarian, renal cell,etc), primary brain tumors such as low grade and Glioblastoma Multiforme, and other non malignant tumors including pituitary tumors, meningiomas, acoustic neurinomas and skull based tumors. Dr. Zamorano began the radiosurgical treatment of AVM (vascular malformations) first with LINAC and then with Gammaknife. Finally, she introduced the treatment of trigeminal neuralgia with Gammaknife. Dr. Zamorano was also the first in Michigan to begin the radiosurgical treatment of brain lesions with LINAC and Gammaknife. She has, undoubtedly, the most experience in the State of Michigan, in all indications, including tumoral and non-tumoral pathologies.

The continuous efforts of Dr. Zamorano and her team made it possible in December 2000, through the collaboration with a robotics company from France (Neuromate), to perform the first brain robotic surgery in the USA with the system she helped implement and gain FDA approval.

Dr. Zamorano’s CAS Lab was able to obtain funding since its inception in 1996 through various agencies (NASA, some NSF, NIH, and foundations, MLSC (Michigan Life Science Corridor Funding). The research funding was key in bringing the first Intraoperative MRI (Polestar 20) to Michigan. It was possible to start this program through a combination of support from DMC and private funding coupled with the MLSC grant. In June 2004, Dr. Zamorano and her team performed at HUH the first surgery in Michigan with Intraoperative MRI. This equipment was the only one in Michigan and one of only 25 in the country. IMRI represents the cutting edge of surgical capabilities and brings invaluable help to many patients. Intraoperative MRI brings the ability to image the brain during surgery. This results in better performance and safer brain surgeries.

Dr. Zamorano holds numerous honors and awards bestowed both in the United States and internationally. She has published over 600 papers and chapters with a focus in stereotactic neurosurgery, multimodality imaging, image processing, computer assisted surgery, endoscopy, intraoperative imaging, radiation therapy, radiosurgery, Gamma knife, Robotics and Laser applications in neurosurgery. She has presented many of these papers at conferences around the world. She has been an invited speaker, participated in and given courses on computer guided surgery and radiation topics in addition to serving as Chair at many of national and international meetings. In 1991, she was elected as a member of the Board of Directors of the American Society of Stereotactic and Functional Neurosurgery, of the American Association of Neurological Surgeons (AANS) and Congress of Neurological Surgeons (CNS). Dr. Zamarano was appointed a member of the Board of Directors of the International Society for Minimally Invasive Neurosurgery and Board of Directors of the International Society for Neurosurgical Instrument Inventors. She also serves on the Editorial Board of multiple national and international peer review journals including Journal of Image Guided Surgery, Neurological Research, Journal of Minimally Invasive Neurosurgery, Journal of Virtual Reality in Medicine, Computer Assisted Surgery Journal, Journal of International Society for Stereotactic Radiosurgery and Journal of Robotics. Dr. Zamorano was included in America’s Top Physicians, 2004-2005 Edition by the Consumers Research Council of America. She is also included in the 2006-2007 Strathmore WHO’S WHO.

Since 1989, she has served in multiple Member Site Visit Team, Workshops, Meetings and Review Committees organized by the National Institute of Health (NIH), National Cancer Institute (NCI), National Aeronautical and Space Administration (NASA), the Technology Transfer Program of the Ballistic Missile Defense Organization (BMDO) and by the Society of Cardiovascular & Interventional Radiology (SVIR). She served as Clinical Team Leader for Neurosurgery of the Joint Technology Transfer Program in the area of minimally invasive image guided tumor diagnosis and therapy (IGDT). Dr. Zamorano also served as Principal Investigator of the national study RTOG 93-05, “a phase III trial comparing the use of radiosurgery followed by conventional radiotherapy with BCNU to conventional radiotherapy with BCNU for supratentorial glioblastoma multiforme” of the Radiation Therapy Oncology Group. In 1995 she served as co-chair of the Task Force on Image Guided Neurosurgery of the American Society of Stereotactic and Functional Neurosurgery. Dr. Zamorano has also been awarded multiples grants with emphasis in clinical research; including one from Aventis for the use of interstitial chemotherapy and immunotherapy in malignant brain tumors and another from NASA for “Development and Human Factors analysis of Advanced 3D Visualization for Tele-presence”. She was also awarded an MLSC (Michigan Life Science Corridor) grant 3.6 million dollars entitled “Bioengineering and Biocomputing tools to advance CAS in Michigan”. A Patent on “Augmented Tracking Using Video and Computed Data and/or Sensing Technologies” was also filed with US Patent Office and the derived research is being used to develop Augmented Robotics for Neurosurgery.

During her work at Henry Ford Hospital and Wayne State University Dr. Zamorano was dedicated to teaching activities including postgraduate training in neurosurgery. Since 1991, she has been the Medical Director of Clinical and Research Fellowship in Stereotaxis, Neurosurgical-Oncology and Radiosurgery at WSU including Gammaknife to train young neurosurgeons in the field of CAS and Radiosurgery. More than 50 neurosurgeons from the USA as well as Europe, North, South America, and Asia trained under her direction and have become major world leaders in the field.

In June 2005, Dr Zamorano established her own neurosurgical Practice Lucia Zamorano, MD, PLC. This private practice is sustained on the pillars of clinical, academic, research and teaching excellence merged with quality service. The mission of the Practice is “to provide the highest quality of neurosurgical care to each of our patients in a compassionate, efficient, effective and personalized manner”.

Please tell us about your experience

Thank you! We need your help. Would you share your experience on one of these platforms? 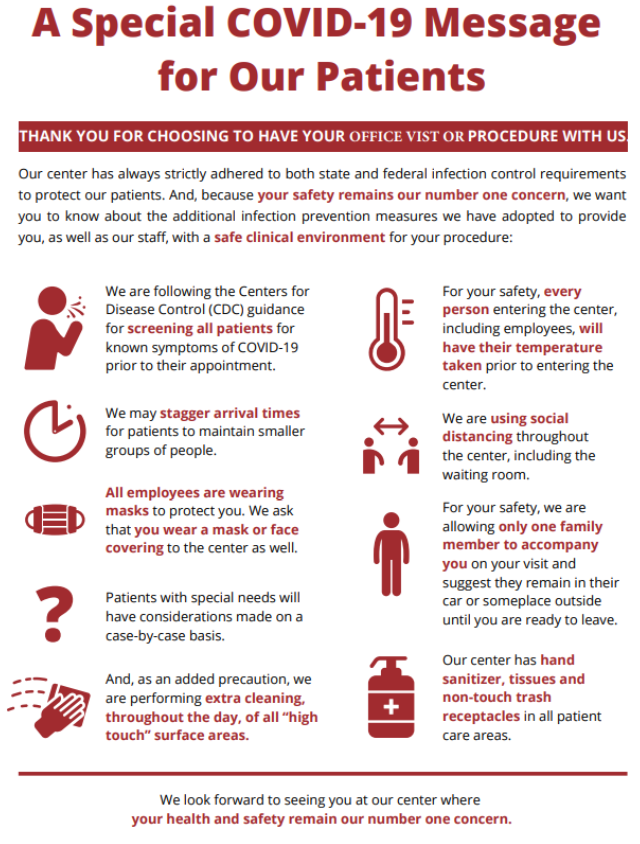